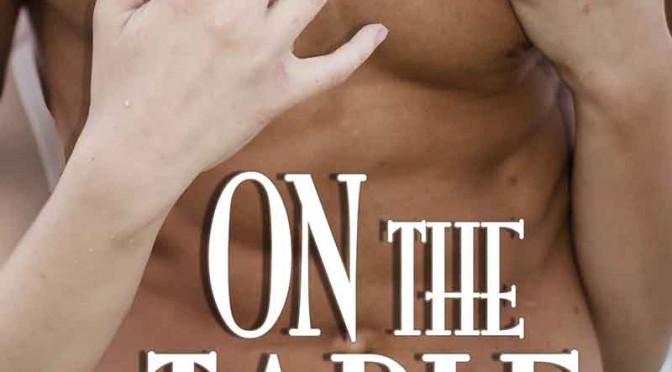 Pre-Order Now: On the Table

The fourth story in Over the Top series!

(You can read the first preview, After-Party, here)

On the Table: In Bed

They pulled Alice to her feet and removed her ridiculous outfit, revealing the long, alabaster legs and curvy, porcelain butt that freckle-faced Suzie had always envied — and that she now found herself running her hands over as she kissed her friend’s neck. Danny’s fingers explored Alice’s breasts as his mouth continued to pull at her lips.

“You’re so beautiful,” Suzie murmured into Alice’s ear. It was true — something she had always thought but never said. “I can’t believe you can’t have any man.”

Alice gasped as Danny’s teeth found her throat; her head fell back, her hair spilling over Suzie’s shoulder. “Ahhhh. Love is a mystery after all. Mmmm. I can’t seem to find one. A man. Or a woman. I’ve never cared much about the outside really. Just someone lovely and… Ohhhh.”

Suzie was suddenly aware of the fresh scent of Alice’s excitement. After all of these years together, she was very familiar with the smell of her own juices and Danny’s — the juices that were still spilling out of her. But this was something new, tarter and richer. Without thinking, Suzie reached around her friend’s hip and investigated the texture of a very different thatch of hair, of broad and frilly lips spread wide, a stiff nub at the front to circle. Her hand had danced this dance so many times, and yet here she was, fondling another woman’s cunt, and there was something both familiar and frightening about the feeling. “Alice,” Suzie muttered, “do you think Danny is lovely?”

Alice whimpered before nodding. He had lowered his head to her high breasts.

“Would you like him to fuck you?” Suzie asked, and felt a spark of panic flow through both of her partners. Why did she have to have been the calm one?

When Alice answered, however, her voice managed to sound as elsewhere-occupied as ever. “Yes, actually. That would be quite nice.”

And so they led her to the bed — their bed — trailing clothing as they went, and Alice finally put down Danny’s scotch (mostly half-melted ice now) and helped Suzie kiss Danny’s cock back from its half-slumber to wonderful solidity. She contemplated sucking him dry, but knew that he would last longer than her jaw, since he’d already come tonight. Once he was hard, Suzie pushed him onto his back and maneuvered Alice astride him, pleased to find that she was admiring the contrast between their skins — Alice smooth and pale, Danny muscled and dark — rather than feeling jealous. She gave them each a kiss and then stroked their nipples as Alice lowered herself onto him.

Alice’s expression usually ran a fairly tight gamut from utter distraction to vague pleasure to abstracted concentration. As Danny’s flesh pressed into her, Suzie saw her friend’s face take on an ecstatic expression — neither happiness nor sorrow, but a feeling that Alice’s usual placid features couldn’t encompass.

Alice began to rock her hips against Danny, and Suzie moved behind her, running her hands over Alice’s front, licking at her ear. Alice was making very un-Alice like sounds; when Suzie’s fingers reached her clit where it slid along Danny’s pubic bone, she let loose a growl that was two full octaves lower than Alice’s normal voice.

“So, Alice,” Suzie murmured, “what was that thing you did with your fingers?”

“Come on, Alice, it was really amazing. What was that?”

Which made no sense to Suzie at all, though it did make her wonder just what Alice and her colleagues got up to down in their lair. It didn’t seem to matter much. She kept up her stroking and pinching, working in time and then in syncopation with Alice and Danny’s writhing.

As Alice began to come for the first time, Suzie embraced her from behind, peering over Alice’s shoulder into her man’s blank, sweaty face. As Alice howled toward the ceiling, Danny locked eyes with Suzie and mouthed I love you.

For some reason it was that, of all of the possible things, that snapped the spell for Suzie. She released Alice, who fell forward onto Danny’s chest. When Danny began to slow, Alice screamed, “NO!” and slammed her pelvis against Danny’s.

Suzie moved beside them as they fucked, touching them still, though her mind was losing contact. Cold, slippery shame began to course through her, a feeling she hadn’t struggled with much recently, and she began to cry.

Neither of her lovers noticed. Danny had his sex scowl on, a look that Suzie was intimately acquainted with, while Alice’s fuck face was as always placid, utterly at peace, even as her body rippled with one orgasm after another.

At last, Danny flipped Alice onto her back, thrust into her twice more, and growled.

That was a sound that Suzie had heard once or twice.

Danny slowly backed away from Alice, uncoupling with a slurp, kissing her sweat-bright face. Suzie sat there, knees curled into her chest, appreciating the beauty of what she was seeing and yet filled with shame and terror. Soon she could not see.

A kiss cooled her cheek — Alice’s, by the lips’ width. Suzie tried to blink away the tears, but could only manage to see a black-haired blur and a blonde one. This is how Danny sees without his glasses, Suzie realized, and she began to laugh wetly.

She tried to dismiss her own display. “Fine. I’m just…” But she couldn’t think what she just was, and sobs bubbled up and choked her.

Four arms laced themselves around her, rocking her. Her boy. Her best friend. Alice’s breasts against her arm. Danny’s damp, softening cock — damp with Alice and with Suzie herself — against her hip. She sobbed in their arms until she felt ridiculous, but she could not stop.

One thought on “On the Table Preview #2: In Bed (FMF Menage)”