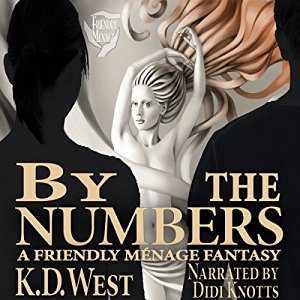 Audible announced the release of the audiobook edition of By the Numbers: A Contemporary Fantasy Menage. K.D. West’s contemporary fantasy erotica novel is available on Stillpoint/Eros, on Amazon, on iTunes, and Audible. By the Numbers follows Jen and Jack Phalen. The happily married pair’s life is magical in more ways than one. When they were young, Jack and Jen fought and won a war, and came out heroes. Then they got married, got jobs, raised kids, and lived, for the most part, happily ever after. But Jen’s childhood best friend disappeared nearly 20 years ago, and Jen’s beginning to give up hope. A game of very adult let’s-pretend leads to a discovery that is very magical indeed, but that could destroy Jen’s life.  Or could lift it to a whole new plane. What happens when rediscovering your youth leads to discovering something altogether new about yourself?

Produced by Stillpoint/Eros, the audiobook was read by award-winning narrator Didi Knotts.

By the Numbers audiobook preview: